"The Music Is Our Ocean" An Interview With DAX PAGE 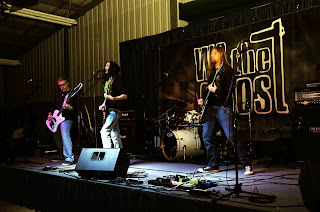 Kirra is a rock band out of Oklahoma City with a style described as "straight up rock & roll". Whatever that might mean to the listener, it's a fact they've been experiencing straight up growth. In their short life they've already opened 3 Doors Down, Saving Abel, Icon for Hire, Primer 55, Screaming for Silence & Kill Devil Hill, while gigging at such venues as the the Harley Davidson Show, Dallas Music Festival & the famous Whisky A Go-Go. In 2014 they released the 4 song EP Sounds From An Empty Room, while a 4 song demo is also available for listening on Sound Cloud. Members of Kirra include Jesse Williamson on vocals/rhythm guitar, Ryne McNeill on bass/backing vocals, Daxton Page on lead guitar & Zach Stafford on drums.l

I remember when I had the chance to go to my first high school reunion. I was fascinated by where my alumni might have gone versus where we expected they would go or what they proposed. That attitude has been with me for many other things including my extensive work promoting up & coming bands like Kirra. I love seeing potential grow & develop & surprise everyone. While a band like Kirra doesn't make you wait long to surprise as in their short history their resume has grown exponentially longer. Thus it's a pleasure to have been able to find out about the energy & experiences behind Kirra with their lead guitarist Daxton Page.

Special thanks to the band's manager Randy Page for making this interview possible & helping bring the band to my attention.

AJ: KIRRA has been around for a little over a year. What's the band's history?

DAX: Well, KIRRA started out with Zach & I. We were looking for a bass player & a vocalist & had literally turned everywhere to find one. Believe it or not, we found Ryne on Craig's List. He answered our ad & told us his best friend was a vocalist who could play guitar, which was Jesse. KIRRA was literally forged our first rehearsal together. We even just jammed a song that later became a song off our EP titled "Drown" at our first rehearsal. We've been writing & trying to gig ever since!

AJ: You've opened for 3 DOORS DOWN, SAVING ABEL, ICON FOR HIRE, PRIMER 50, SCREAMING FOR SILENCE & KILL DEVIL HILL. Any highlight or story from one of these concert encounters that you can share?

DAX: I think just hanging around with the bands has been amazing! It's good to know famous known acts have humility even through fame. One thing that stands out was the crowd at the 3 DOORS DOWN show! Casino crowds are hard to please & they were with us from the get go. Definitely an unforgettable experience!

AJ: 3 DOORS DOWN is a Billboard Top 10 selling band. Any advice you would tell a band looking for the same type of gigging opportunities?

DAX: Getting that gig was a great opportunity. It helps to talk to & get to know as many people in the industry as possible. You never know who knows who & this is a who you know industry. Luckily we knew somebody in the casino circuit & they needed a band! Right place, right time, right people to know kinda thing.

AJ: Your new 4 song EP Sounds From An Empty Room, with its John Cage-esque title, is laced with deceptively depressing song titles (i.e. "Downfall", "Drown", "Lies", "Forgive Me"), yet the chorus to "Downfall" ("be my fall/be my downfall/I have nothing without you") demonstrates what I call the negative love song - love being described with a negative motif such as loss - which gives the EP to my ears a surprise outcome. Tell me about the writing side of KIRRA. Who does the composing, who does the lyrics & what's your process of creation?

DAX: How we write songs is done a couple ways. We mostly stumble upon riffs or chorus ideas & develop it in rehearsal. Every member of the band throws in their little touch to it. Lyrically Jesse writes 99% of them. The only track that's been recorded that I wrote lyrics for is "Forgive Me". Ryne has also came to me with some lyrical ideas that will be songs sometime soon! So really anybody with an idea comes to the table & we try to expand on it.

AJ: As you are currently work on your new full length album Run Away what can fans expect to hear and how does it differ from Sounds From An Empty Room?

DAX: Run Away is like our equivalent of Jimi Hendrix's Are You Experienced? record. Now when I say that I'm not saying by any means that this record is as legendary as Jimi's but that the way it was recorded. Jimi's first record was very raw & to the point. We tried to be as raw & as us as we could be. It will include songs from the EP & demo, but more updated. That way people can hear the evolution of some of the songs. This record we advise people listen too start to finish. We go through many styles of rock, even threw in a little blues-rock song.

AJ: On Soundcloud is a 4 demo that is much heavier sounding than your EP, on some level. In the year plus you've been together, how has the band grown musically? How have you grown as composers/songwriters?

DAX: Through the past year or so we have kind of come into our own style. We like to keep listeners guessing when listening to songs. You'll notice all our songs are very melody-based but once some sort of breakdown happens it gets very heavy & almost metal in some songs.

AJ: Your demo was posted online only after KIRRA was a few months old. Why did you decide to post recordings up so early, versus waiting longer to hone your band chops?

DAX: Well, basically, once we got those songs down we wanted to get them out so our fans could hear our music somehow & try to spread our music as early as possible.

AJ: Lastly, where does the band name come from?

DAX: The name comes from a beach in Australia. Surfers sometimes say when you're on the board & riding the waves it's easy to get lost in the moment & become one with the ocean. The music is our ocean.

Total views - thank you all! 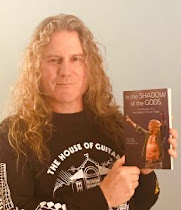 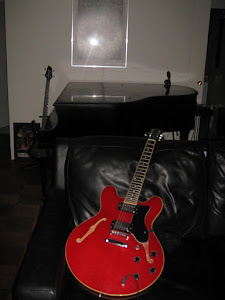 FOR THIS BLOG:
>> "Thanks for the support." -bassist Billy Sherwood of Yes
>> "Certifiably brilliant. You're funny, smart & off the chain, so all I can do is shake my fist at you." -guitarist Matthew Meadows aka Rango
>> "You are a great interviewer & artist relations guru!" -songwriter Troy Montgomery of Under The Gun Project with members of Savatage
>> "Say what you want about his particular taste but Aaron knows his music, lives it, loves it. The way it was intended to be experienced." -guitarist Peter Tinari who worked with Derek Sherinian
>> "You've interviewed guys like Graham Bonnet, yet you still give the chance to us smaller guys to have our voice heard. If more people did that it would certainly be easier to get our music out there." -guitarist Dan Sorber of Forex Canorus
>> "People like you are so important to this indie movement. We need a voice. We need a lot of voices. Not many of us are going to get rich doing this, but we need a place to be heard. This whole indie thing is exploding, but is still in its infancy & infants need leaders to show the way. That be what you are." -bassist Travis Haugen of After All These Years
>> "As a Savatage fan I was stoked to hear your interview with Damond Jiniya! You really did a great job of asking the pertinent questions." -George Pitcher Savatage fan
>> "An amazing labor of love." -Rodney Miles co-author '365 Surprising & Inspirational Rock Star Quotes'
>> "You have some really cool interviews up there." -Alison Taylor co-author '365 Surprising & Inspirational Rock Star Quotes'


FOR MY BOOK "IN THE SHADOW OF THE GODS: THE MEMOIRS OF A LED ZEPPELIN TRIBUTE SINGER" (with Jean Violet of the Led Zeppelin tribute band Kashmir)

"Aaron really did an amazing job. Aaron & I fused together. We made a goal. It wasn't going to be about sex, drugs, rock'n'roll & all that. It wasn't going to be about stepping on all my friends or people in the band or people in experiences. The whole purpose of this book was to show people that in the business you're gonna get thrown curve balls, but you can get through life, be a musician, & be happy by adapting & getting through it." -singer Jean Violet of Led Zep tribute band Kashmir
>> "A brilliant approach to making a book like this. To any Led Zep fan it's more than just a biography. Some of the parts that really grabbed me were the speaking of different tribute bands & the approaches that were taken during his journey. After reading this you will gain more respect for all tribute band musicians' rock n’ roll roads they have taken." -Led Zeppelin USA website
>> "So vivid in your descriptions. Such a heartbreaking story, but such a sweet story. If you're a musician & you've been through anything you'll definitely relate to this book, but you'll also learn some stuff. You guys are the premier Zeppelin tribute band." -bassist Steve Witschel host of Cover Band Central Wizdumb Hour podcast & former bassist of Kashmir
>> "I was working in my garden yesterday when Fed Ex delivered your book. I sat on my porch & read 5 chapters, & couldn’t put it down. Awesome story. I can relate to so many things, too many to mention. The one thing that comes to mind is, the first time we experienced Kashmir the after show meetings showed us a band that was very down to earth & as genuine as you can get. Thanks for sharing your life with us." -anonymous fan of Kashmir
>> "The book was inspiring." -Melissa G., fan of Kashmir

FOR MY BOOK "DRIVIN' SIDEWAYS: THE STORY OF THE BAND DANGER DANGER":

>> "I admit that D2 wasn’t a band I was particularly familiar with prior to reading. Now that I’ve read it, I feel like I sat down & personally talked with each member. Aaron holds back nothing in his honest assessments & critiques of the band, while still presenting the band’s story as their own, from their own words. It’s evident the author is a fan; not just of the band, but of many of the band’s members, & that can be heard in his commentaries, historical details, & array of knowledge that can only be had when one truly enjoys the music as well as the people." -Dr. Lee Ann B. Marino editor of Bookmasters blog

FOR MY BOOK "HEAVY METAL MUSIC FROM THE INSIDE: QUOTES ON BEING A ROCKER":

>> "You are amazing to me, bro. I have read your book 5 times now & its just f'ing killer." -singer/drummer Charlie Z of the Militants
>> "The book is awesome." -Michael Schermuly promoter of Ringo Starr
>> "You applied the industrial music art philosophy to a book? Genius! That concept of imperfect art for the sake of humanizing it." -keyboardist Stefan Klein of Dethcentrik
>> "Well researched & presented. Its something pretty unique." -librarian Ed King of Maine Masonic Grand Lodge library 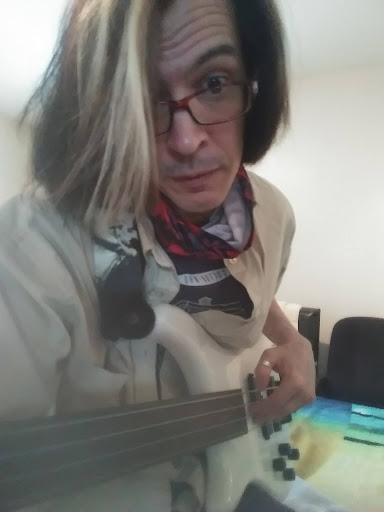 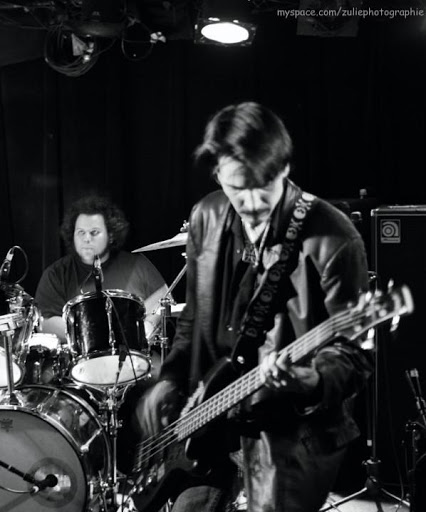 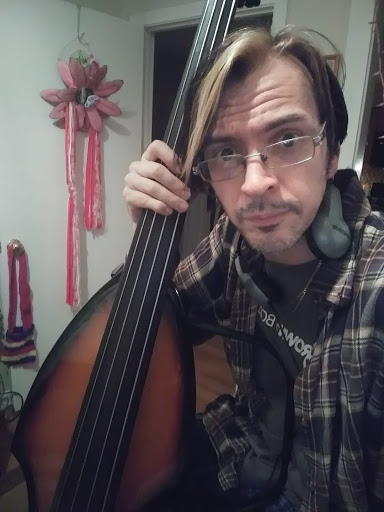